There are only 8 spots available

Already at the end of June and the summer holidays that are coming. Maybe you're still looking for where you're going to go? Many young French people no longer ask themselves this question, they are heading towards the junk. And if they go to the junk it is not for its cultural heritage…

La Jonquera: Capital of prostitution for the French

If so many French people go on holiday to La Jonquera it is because it is one of the first cities of importance after the border and that in Spain prostitution is legal. Located a few minutes from Perpignan, La Jonquera has organized part of its economy around prostitution and the French clientele. Halfway between sea and mountains and offering prostitutes in a legal framework, the junk will appear for many young people as a paradise destination for holidays or even for a simple weekend.

Where the junk will differ from cities such as Amsterdam or Geneva, in which prostitution will also be legal, is that its economy is organized to please the French and give them what they expect. In La Jonquera many clubs presenting strippers prostitutes have been created almost exclusively for the French clientele. And if the whores working there come from all over the world (Eastern Europe, Black Africa, Latin America …) nevertheless, they speak almost all French. If you decide to go on holiday to La Jonquera do not expect to find a change of scenery, it is practically a French city under Spanish legislation.

The clubs of the junk

At the junk the whores work in puticlubs, the Spanish term for brothels. 4 clubs mainly share the market and offer services of safe value.

Lady Dallas is the most well-known club in the junk and one of the biggest. Although a little aging it remains a reference by the number of girls working there and the quality of the reception.

The most chic club in the junk, it relies on a more intimate atmosphere to attract a clientele a little more upscale than that of other clubs. Probably the best atmosphere of the junk will but is also more selective. Do not hope to enter in Bermuda and flip-flop, here the atmosphere is rather evening dress and at least shirt for guys. So we find mostly men of 30-40 years old ready to pay higher rates of 60% than those of the most affordable clubs of the junk. 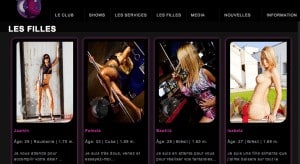 On the Moonigh site are featured 2 Brazilian, 1 Romanian and 1 Cuban.

Of the same generation as the Lady Dallas, the Madam's is a little losing momentum. The arrival of new clubs has hurt him a little and his rates a little higher than those of other clubs in the junk make him a second choice for many customers. The Madam's of the junkra has of course nothing to do with that of Paris.

The latest of the junk clubs, paradise is the one that presents the best. Allowing you to invite whores to the restaurant if you like the girlfriend experience, it is the most fashionable of the clubs of the junk.

The rates of the whores of the Jonquera

Rates can vary from one whore to another but they are overall between 50 € at Lady Dallas and 80 € at Moonight. Prices are to be set between you and the girl before going anywhere. They are negotiable but define them before going up to avoid being pigeonholed with a surprise rate at the exit. Take your time before choosing, whores are very aggressive in soliciting and will prompt you to choose quickly but do not give in, you need to ask all the important questions for you before choosing. Trust your intuition to know if you are dealing with a scammer or a good girl.

The traps of the junk 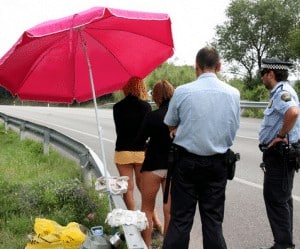 In La Jonquera the roundabout whores will make you risk a fine of 1500 € for exhibitionism. Prefer club whores.

Whether or not we like the principle of prostitution, we cannot say that La Jonquera has pitfalls at this level. The economy revolving around whores everything is square and the competition quickly eliminates the less honest market players. The pitfalls are rather to be found in the before and after. A drink being offered to you with any entry into the club you will quickly end up drunk, so be careful before taking the road, the French police waiting for you at the border to pick you if you exceed the limits. Never resort to a whore on the street. If prostitution is legal in Spain exhibitionism is not, then settle for the girls of the clubs. Be sure to always go to the junk in a group with people you know well and can count on in case of problems. The sex economy does not get involved in lawsuits in case of disagreement, the security services of the clubs of the junk will always take the side of the girls, whether they are right or wrong. Last common sense advice, limit the amounts in cash. Most establishments take the credit card (against commission sometimes), so do not take the risk of losing large sums because of alcohol and the withdrawal of your clothes.

An equivalent of junk in France?

The France being resolutely anti prostitution there is no equivalent to the junk in France. To meet girls with whom it is easy to sleep you will have to go to sites specializing in naughty dating like www. JacquieEtMichel-contact.com or www.Xflirt.com. These sites will allow you, for the price of a whore, to meet between 4 and 5 girls per month who will not look for anything other than an booty call or a regular booty call. Depending on the period, these sites offer free registrations or trial periods to meet girls for free and can therefore be more profitable than a trip to the junk. A must try if you like sex with girls with whom you do not aspire to make your life and that the junk is a little far for you.