Niamodel: The escort girl site is back

There are only 10 spots available

Above niamodel's homepage before his disappearance

Niamodel is (was?) a website allowing you to get in touch with female or transsexual escort girls. Very present on the French market, Niamodel disappeared less than a month ago causing a strong stir among users who have become, for some, very dependent on its service. By disappearing, Niamodel caused a whole bunch of rumors.

No official information has come out to explain Niamodel's disappearance. On the forums, some talk about piracy, others consider forgetting to renew a domain name, and the link with the law penalizing the use of prostitution is necessarily in everyone's heads. Regarding the forgetting to renew a domain name, few believe in it, the domain name of Niamodel seems reserved until 2015. The hypothesis that the most people seem to believe in would be that of a hack attracted by the large sums managed by Niamodel. 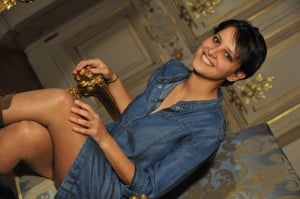 Some associate the disappearance of Niamodel and the Vallaud-Belkacem law, forgetting that pimping has long been banned in France.

On our side, we rather think that a site like Niamodel connecting people selling sexual favors and men using their services could not have a long life on French territory. Even though Niamodel once redirected himself to Niasecret.ch, located in Switzerland and therefore in a country where prostitution is legal, he continued to boast of providing escort girl services throughout the France, his description at the time being:

Regardless of the law penalizing the clients of prostitutes, French law has always penalized pimping and Niamodel's business model could come close to it, without the most gloomy aspects of pimping. So, rather than making the connection between the Vallaud-Belkacem law and the disappearance of Niamodel we will rather associate it with the ongoing investigation associating a potential pimping and the site sugar daddy, dating site yet much more classic than Niamodel could be. EDIT : More comparable to Niamodel, the Eden Escort site was taken offline after its founder was arrested for alleged pimping. The hypothesis of the hunt for online pimping is therefore confirmed to explain the disappearance of NiamodeL

What alternatives to Niamodel after his disappearance?

We have already talked about escort girl here and we are not big fans, especially since the client can be penalized. So we will not tell you how to meet a prostitute (it would be pimping in the legal sense) but rather inform you that it is very simple to meet liberated women who do not ask to be paid to sleep with a man. Those who sell their bodies often have a fairly fulfilled free sexuality and it would be a shame to pay for something that many men get for free. If you're looking to sleep with a Niamodel escort girl, the easiest way is to look for them where they're looking for their free booty calls. Classic dating sites but oriented booty calls connect men and women wishing to sleep together without paying any amount of money. The relationships that result from these meetings are much healthier than those that came from a Niamodel meeting since in the absence of payment the booty calls can become regular and the sexual relations mutually pleasurable. If you are looking to replace Niamodel, we recommend that you change your relationship model. No longer pay an escort girl for each meeting, choose instead to pay a subscription to these dating sites and then meet a lot of girls for free. For the price of half an hour with an escort girl you will have 2 months of subscription and can meet girls by the dozens. The www.Xflirt.com and www.  JacquieEtMichel-Contact.com are probably the best sites to meet booty calls wherever you find in France or in neighboring countries. These sites allow you to try their services for free before possibly subscribing. Www.Xflirt.com is a 100% online site and 100% dedicated to naughty dating.  In its operation it is very close to classic dating sites such as Meetic or Easyflirt except that it is dedicated to naughty encounters. Www. JacquieEtMichel-Contact.com is a site that works with messenger software. This very well done software allows you to get in touch with the girls closest to you, to exchange with them by chat or webcam and to organize very easily physical meetings. Do not hesitate to try them, you will see that you will quickly forget Niamodel while remaining within the framework of the law and saving a lot of money.

Read: The best sites to find an booty call

The return of Niamodel in 2020 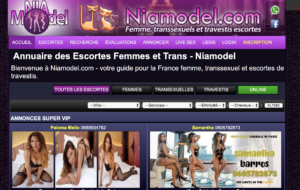 Niamodel is back but his web designer has remained on vacation

We update the article following the reappearance of the Niamodel site. The aesthetic aspect is absolutely disgusting, useless to do in half measure. A design worthy of jeuxvideo.com in its early days.

How many escorts on the new Niamodel?

For the moment there are very few escorts who offer their ads on Niamodel apart from Paris. For Paris we see more than 1000 ads but in other cities, especially provincial cities, we only exceed 10 ads in cities like Bordeaux, Toulouse or Marseille. This gap is quite strange compared to other escort sites and we admit that we do not know what to think about it…

If you like trans people and transvestites, you can find your happiness on the new niamodel. Otherwise you will have to go elsewhere. You can access the escorts' files via filters at the top of the page so if you only want to see women it is still possible.

The sexual practices of escorts on Niamodel 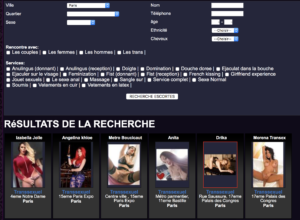 The research is pretty well done on the new Niamodel

What is well done on niamodel is that the escort practices are clearly detailed and written in full letters. No need to decipher the abbreviations as it should be done on 6ads and company. If an escort practices facial, she will explicitly write it on her ad. At the legal level not sure that it is very clean but it is not really our problem. Another really practical thing, the search engine of niamodel allows to search for escorts according to the proposed practices. So if you are looking for a woman who practices the golden shower in Paris, you can quickly find all the ads that meet your desire.

Our opinion on the new Niamodel

We could not test the escorts but the new niamodel, once past the disgust inspired by its design, is a site that we found very well done and very complete. We will leave it to you to test the girls present on the site, we will take your feedback!